Home › Valuable Articles › How to get Affected by The Qur’aan

How to get Affected by The Qur’aan

How to get Affected by The Qur’aan 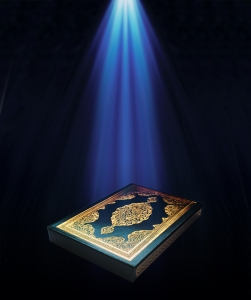 1. Al-Imaam At-Tabaree (rahimahullaah) said :
Indeed I am amazed by the one who recites The Qur’aan and he does not know its interpretation! So then how does he enjoy its recitation?!

Therefore if we want to get affected by The Qur’aan, we must ponder over its meanings.

2. We should specify time or times for it.
Dont let the recitation of The Qur’aan be only when the Iqaama for the congregational prayer was delayed.
Rather it is incumbent to give it a portion of your time.

I am not saying keep for it half an hour in a whole day ï¿½ such that you specify this for recitation of The Book of Allaah The Exalted , and also pondering over its meanings.

Nor [am I saying] to make the time for The Qur’aan to be when you are free only, meaning if you were busy with something else ; you would not have recited it.
No.

3. Increasing in reading the biographies of the pious people , and [specifically] their chief, your Prophet (sallahAllaahu alayhi wasallam).
And [reading in] how he used to recite [The Qur’aan] and ponder over it, may Allaah’s good praise be on him.
Then read the biographies of the [Companions] and the Tabi’een [their successors] and the followers of the Tabi’een, and other than them from among the Predecessors.

The Prophet (sallahAllaahu alayhi wasallam) stood the whole night [in prayer] reciting one verse [and repeating it] : “If You punish them, they are Your slaves, and if You forgive them, verily You, only You are the All-Mighty, the All-Wise.” [1]

As from among the biographies of the Companions : here we have Usayd ibn Hudhayr , who used to recite The Qur’aan until the Angels descended to listen to his recitation.
Narrated Al-Baraa bin ‘Aazib (radhiyaAllaahu ‘anhu) who said:
“A person [from among the companions] was reciting Soorah Al-Kahf, and there was a horse tied with two ropes at his side. Then a cloud overshadowed him, and as it began to come nearer and nearer, his horse began to take fright from it. In the morning He went and mentioned that to the Prophet (sallallaahu ‘alayhi wasallam), and he (the Holy Prophet Sallallaahu ‘alayhi wasallam) said:
“That was the tranquility which comes down due to the recitation of the Qur’an.” [2]

And here we have Sufyan at-Thawree , an Imaam from among the Imaams of the followers of the Tabi’een ; he stood the whole night reciting : “The mutual rivalry for piling up of worldly things diverts you” [Suratul Takaathur] , repeating it, contemplating on it, and looking into its meanings, and treading upon it ; the whole night.

4. Also if you want to enjoy the recitation of The Qur’aan ; then it is upon you to recite the correct recitation.
To observe the rules of tajweed.

And from the most important of matters ; is to recite [and learn] from a shaykh who is well versed in tajweed.

5. To strive to live with The Qur’aan, such that when you recite a verse of warnings , And likewise the verses mentioning the fire, and the paradise: it is upon you to be affected by them , and to be in-touch with their meanings.

Likewise when you recite Suraatul Aal Imraan and Al-Anfaal and Al-Ahzaab, and the battles in which these Surahs talk about : it is upon you to live with them and to imagine as if you were together with the company of the Prophet (sallahAllaahu alayhi wasallam) and his companions ; and that you fought alongside them and strived.

And when you recite the verses which emphasize on spending ; you should go out and give in charity.

Just as Abdullaah ibn Mas’oud said :
“When you hear [a verse of The Qur’aan] mentioning : “O you who believe…”: then pay attention and listen ; for it is either a good thing you are being guided to , or an evil which are you being warned from – by Allaah The Exalted.”

6. Being attentive , and lack of distractions.

7. Recitation in a beautiful tone.
Indeed the Prophet (sallahAllaahu alayhi wasallam) said :
“He is not from us the one who does not recite the Qur’aan in a beautiful manner.” [3]

So recite it in a beautiful tone.

Don’t recite The Qur’aan like you are reading the daily newspaper , or any other book.

Allaah prescribed for the prophets (may peace be on them) to recite in a melodious beautiful tone. Thus the prophet of Allaah ; Daawood (alayhi salaam) used to have a heart-rendering voice during his recitation.

And the Prophet (sallahAllaahu alayhi wasallam) used to say to Aboo Musa al-Ash’aree (radhiyaAllaahu anhu) : “It as if Allaah has bestowed you with a flute from the flutes of the children of Daawood.” And this was due to his beautiful voice [in recitation].

Don’t you see that the Prophet (sallahAllaahu alayhi wasallam) repeated the same verse in the whole night prayer.

Tagged with: purification of the soul, quran
Posted in Valuable Articles